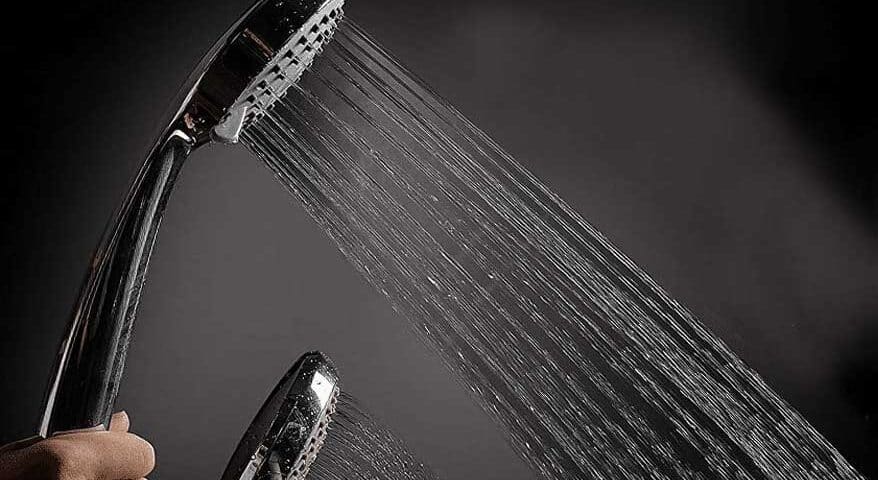 If your shower head is failing to provide high-pressure jets of water, then it’s time for an upgrade. We can help you improve your bathroom with a shiny new, cheap shower head that’s incredibly easy to install yourself. Explore our guide to the most popular low pressure shower heads for your home and save yourself some money.

The best shower heads for low pressure systems will increase the force of water leaving your shower. That means you can have a proper satisfying scrub rather than being forced to stand under pitiful, forceless drops of water.

We’ll get right to the point. If you’re shopping for a low pressure shower head and don’t have time to read this full guide, try our exclusive links: Amazon, eBay, Homebase, Robert Dyas and The Range.

If you’re dealing with a shower that doesn’t offer much force, swapping your current shower head for a new one can make a massive difference.

Shower heads for low pressure systems usually have less perforations, and the perforations that are there are extremely small in size. That means the water has less space to escape, which ultimately causes the jets of water coming out of the shower head to be stronger than they were before.

Lots of shower heads for low pressure systems will have little beads inside them, as you’ll see below. Not only do these filter the water in some cases, but they also give the water less space to move, again increasing the overall pressure.

Shopping for a new shower head in-store is handy because you can actually look at the product up-close and make a decision. But in our experience, shopping online for shower heads is more convenient and you get a much wider range of options to choose from.

Popular retailers that stock a good variety of shower heads include Amazon, eBay, Homebase, Robert Dyas and The Range. Our top picks below are sourced from Amazon UK.

This shower head is most of the most popular options suitable for low pressure shower systems available on Amazon. In fact, at the time we’re writing up this article, it’s blessed with a 4.5-star customer rating based on over 9,000 individual reviews – not bad at all! The Magichome Ionic Shower Head lets you cycle between three different mode modes and will help you save water at the same time.

Mineral balls that sit inside this shower head can help to remove chlorine and fluoride from your water, along with toxins and heavy metals. In theory, this should keep your skin smoother. DIY newbies needn’t fear this shower head, by the way – you can connect it without using any tools and manually tighten it. In the pack, you get a shower head, two packs of replaceable mineral beads and a spare rubber plate.

Dothnix has a shower head up for grabs at less than a tenner. Trade your old head for this replacement part and the brand promises you’ll be rewarded with consistent, powerful water spray even if you’re running a low pressure system. The Dothnix Power Shower Head is made from an eco-friendly ABS material and is coated with a high-shine chrome finish.

Silicone nozzles make this shower head easy to clean by hand – a quick wipe with a towel once in a while should help to prevent scale build-up. You don’t need to use any power tools to install this shower head, either. It has a universal interface that means it’ll connect to any standard UK shower pipe. Take a closer look if you want to experience high water pressure on a historically low pressure system.

The Y-home Shower Head is designed to increaser water pressure for shower systems that are failing to provide powerful water jets. According to the manufacturer, the water inside the shower head travels through a dual-flow track that is proven to increase water pressure. Clearly, it works – this shower head has a 4.5-star rating based on feedback from over 3,400 customers.

This shower head is one of the most popular options on Amazon around £10. Water slips and slides through a specially designed, pressurized track and, according to the seller, the microporous technology can potentially save ‘more than 20%’ of water. Both the shower head and the hose are made from premium materials that will fit beautifully in any modern bathroom.

There are five unique spray modes on offer if you pick up the OSHELY Shower Head: Jet Spray, Rain Spray, Massage Spray, Mix Spray and Soft Spray. That’s a big upgrade if you’re coming from a gutless shower that can’t fire out strong jets of water. Treat yourself.

Yes, you really can buy a shower head for low pressure systems for less than £10. This budget-priced shower head from Joyoldelf uses ‘Advance Turbocharged technology’ to increase water pressure – sounds fancy, right? A whopping 300 perforations are found on this shower head, which will force water out at a higher pressure than you’re used to.

The Joyoldelf Handheld Shower Head is made from eco-friendly ABS material. A gorgeous chrome finish means the shower head will always shine bright. To install this shower head, all you need to do is connect the shower mount to your existing shower arm and then connect both ends of the hose. Simple stuff.

This unique-looking shower head is a great option if you’re struggling with a low pressure shower system. Each perforation is etched in using a precision laser, which Olliwon says will increase water pressure ‘by up to 200%’. The handheld shower head is made from a robust stainless steel and finished off with a corrosion-resistant surface.

Rotate this shower head and you can flick between four different water modes: Spray, Rain, Pulse and Pulse + Spray. It promises to provide a consistent, high-pressure jet of water that’s just what the doctor ordered after a hard day at work. The CUCM Shower Head is made from high-quality ABS and chrome materials that give it a sleek, modern look.

This VEHHE is insanely popular with Amazon buyers. It provides five different spray modes on a budget and saves ‘about 30% of water’ in daily showers. The shower head can easily be detached from your shower system when it needs cleaning.

How to fit a new shower head

Replacing your shower head doesn’t have to be tricky. As long as you work carefully, you should be able to upgrade your bathroom yourself in just a couple of minutes.

To install a new shower head, follow these quick steps:

If you’re more of a visual learner, take a look at the how-to video below, arriving courtesy of the Home Depot YouTube channel. It explains in jargon-free terms how to replace a shower head.