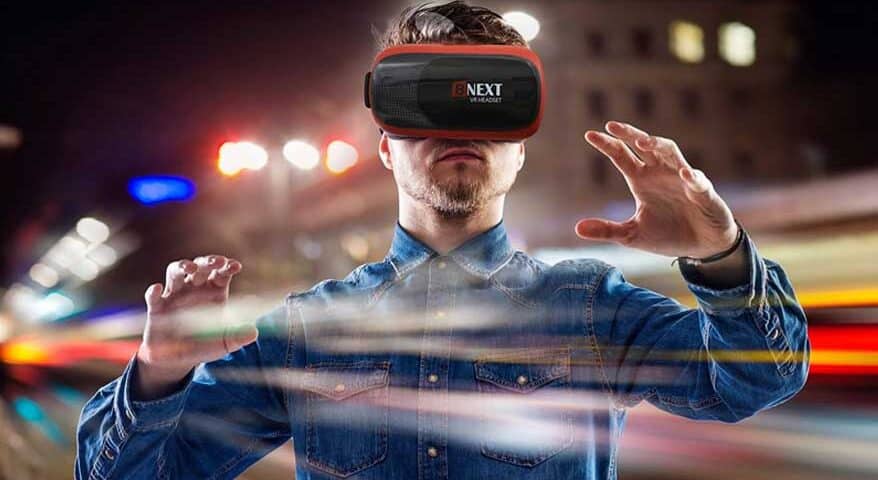 Virtual reality offers up the most incredible, unique gaming experiences on a budget. Our expert guide will help you pick your first VR headset and download some thrilling games and experiences for it.

Below, we run through some of the most popular VR headsets for Android available to buy today. We’ve also had some fun gaming ourselves and put together a list of awesome, free virtual reality apps and experiences.

Do VR headsets come with games?

Virtual reality headsets for Android rarely ship with codes that unlock games. But the good news is there are literally thousands of free-to-download experiences available for your phone today.

Do VR headsets need a PC?

Virtual reality games are available on a couple of different platforms – smartphone, games console and PC. Mobile VR is the most affordable (and the best option for newbies), which means you can grab a headset for iOS or Android for less than £50.

If you’re looking for a VR headset that you can use with your PC, expect to spend lots more money. This is because these devices have improved tracking and better graphics. Popular PC VR headsets include the Oculus Rift S and HTC Vive.

Can a VR headset be used to watch movies?

Yes, you can watch movies in VR using an Android or iOS smartphone. To get the job done, you just need to download one of the popular ‘VR cinema’ apps from a compatible app store. These apps will sit you in a virtual chair at a cinema where you can enjoy the action.

You should also try running a search for ‘VR movie’ on the Google Play Store. You’ll get loads of results chucked back at you, including Within VR, Shaun the Sheep and YouTube VR.

If you want a comfy chair to sit in while you’re gaming in VR, check out our expert buying guide on the best office chairs.

Where can you buy VR headsets for Android?

Shopping in-store for a VR headset can be quite tricky as high-street retailers don’t have a great selection. Want our advice? You’re better off shopping for a VR headset online as you have far more models to choose from. You can also choose to filter your search based on the size of the smartphone you’ll be using it with.

If you’re shopping for Android VR headsets, try paying a visit to Amazon, Currys, eBay or OnBuy.com. But if you’re feeling a little lazy (we forgive you), you can check our list below.

This is an affordable VR headset that’s compatible with smartphones that have a screen smaller than 6.53-inches. It’s not locked to a particular OS, which means you can use it with an iPhone or an Android gadget. To get it going, you simply load up a VR app on your mobile, slide the phone inside the goggles and secure the VR headset with the built-in strap.

The Pecosso VR Headset has an adjustable design, which means you can make sure it’s comfortable while you’re enjoying your favourite VR apps. There’s a soft, cushioned material running around the edge of the headset so it doesn’t press too hard against your face. There’s a little dial on the top of the headset that you can use to subtly adjust the position of the lenses.

This is one of the cheapest VR headsets for Android on our list. It’s suitable for smartphones that have a screen equalling or less than 6 inches. The KINGA VR Headset has a dial on the top that lets you tweak the pupil distance. This is handy because it stops the image inside the headset from appearing blurry while you’re wearing it.

We like the design of this VR headset because it offers a good amount of ventilation for your smartphone. The ends of your mobile will be exposed when attached to the headset, which means the heat doesn’t become trapped inside the headset itself. The soft leather interior running around the faceplate also deserves a mention.

TechRise makes one of the most popular VR headsets for Android on Amazon. This model, which you can use to watch movies in VR, is compatible with smartphones that have a screen size up to 6 inches.

The TechRise 3D VR Headset has a handy focal distance adjustment toggle (convenient for switching between short-sighted and long-sighted users) and a durable head strap.

This VR headset has a detachable cover – you take it off the front of the headset, secure your smartphone in place using the built-in strap, put the cover back on and enjoy your favourite games. Note that the HAMSWAN VR Headset is suitable for phones with screens up to 6 inches.

Take a closer look at this VR headset if you’re looking for something that’s both lightweight and easy to use. The HAMSWAN VR Headset has an object distance adjustment setting that means you can play around by moving the lenses to the left or right., You can also shift the viewing panel further away from your eyes if you want a less restrictive experience.

If you’re shopping for a VR headset that just offers a basic taste of what to expect, you can spend less than £10 on a cardboard headset. These headsets aren’t designed to last too long, but you’ll still be able to experience thousands of VR games and experiences.

Headsets such as this obviously aren’t as comfy as pricier models, but you might enjoy the process of building it yourself.

Once you’ve grabbed yourself a virtual reality headset, you’re ready to dive into the world of games on offer. To download a VR game, all you need to do is head to the Google Play Store on Android and type in ‘VR games’. If you’re using an iPhone, head to the Apple App Store and try the same thing.

Most VR games are completely free to use, although there are paid-for apps and experiences out there also battling for your attention. To get you started, we’ve put together a list of Android VR apps and provided some links to the download pages.

If you know of any fun VR games that deserve a spot on our list, let us know.