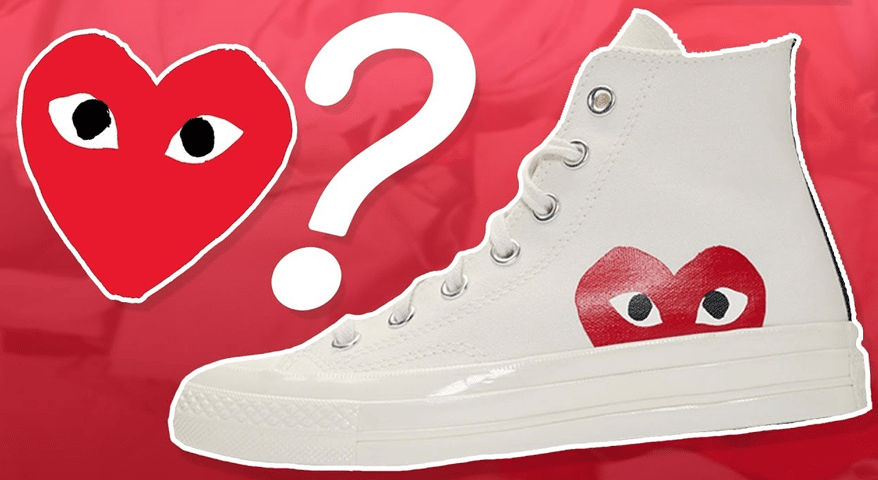 CDG Converse have become increasingly popular over the years, to the point where lots of dodgy sellers have started to sell fake pairs to trick buyers. In our expert guide, we explain how to tell the difference between a real pair of fake CDG Converse and a fake pair.

If you’ve landed on this page, you’re probably in one of two groups. Perhaps you’ve purchased a ‘real’ pair of CDG Converse and you have a hunch they might be fake. Or maybe you just want to know how to spot real pairs of CDG Converse before you grab a cheaper pair off eBay or DePop.

Whatever your situation, keep scrolling as we take a look at the various ways you can tell the difference between real CDG Converse and fake CDG Converse.

Are my CDG Converse real or fake?

Good question – luckily for you, we can help you find the answer. Ultimately, your first thought should be on where the shoes are coming from. For example, are you shopping with a known retailer, or are you instead bidding on an auction through eBay or a similar website?

If you’re buying from a retail store, there’s a higher chance you’re buying real CDG Converse. If you want to learn about the reputation of the retailer, try reading some customer reviews over on TrustPilot.

Be careful of online auctions, as there’s a higher chance the seller could be selling fake shoes. Have a look at the seller’s rating if you can (eBay reviews, for example) to learn abit about them. Of course, not every seller on eBay or DePop is out to get you – there’s a good chance they’re being honest and selling you real shoes.

How to tell if CDG Converse are fake

It’s story time. I ordered a pair of fake CDG Converse from eBay without realising – they cost me £95 and appeared to be arriving from a trusted seller. Before I grabbed them, I’d scrolled through the seller’s own pictures of the shoes and everything looked good.

However, as soon as the shoes arrived, I could see clearly that I wasn’t looking at a legit pair of CDG Converse. To help you out, I’ve listed some features to look out for when you’re trying to work out if your CDG Converse are real or fake.

The condition of the box that your shoes arrive in is a big indicator of whether you’re looking at real or fake shoes. More often than not, fake CDG Converse are sent out in substandard packaging – they might be crammed into a tiny box, or the box itself might have blurry branding.

In our example below, we’re looking at a box that has arrived damaged. The shape of the box is also wrong. When I ordered a real pair of CDG Converse from Selfridges in London, the shoes arrived in a much larger box. The real box is closer to a square shape than a rectangle shape.

Remember, CDG Converse will most likely sell for over £100 brand new. Shoes of this value will be shipped out in appropriate packaging by a trusted retailer. A badly constructed box is a big red flag.

Below, we have a picture of a real CDG Converse box. As you can see, it’s much bigger than the fake box and the branding is both clearer and brighter. A retail CDG Converse box will have lots of different codes on the side of it that are used in-store.

If you’re trying to decide if you’ve bought a fake pair of CDG Converse, open up the shoe and take a look at the sole. There are plenty of things to look for here that can help you.

The picture below shows a fake CDG Converse shoe. When we look at the sole (specifically the heart logo), you’ll see that the pupils in the eyes don’t actually touch the heart itself. Instead, they’re floating in the middle, looking straight ahead.

Now, take a look at the star symbol underneath the ‘Comme des Garcon’ text. On this fake pair of shoes, the star is particularly bold and chunky – this isn’t the case on a retail pair.

Below, we can see a closer look at the sole of the real shoe. This time, the pupils of the eye actually attach to the heart shape. The eyes also appear to be very slightly cross-eyed – they’re not looking directly ahead.

Now let’s take a look at the star underneath the CDG text. The star is much more subtle on a retail pair, to the point where it’s almost invisible.

And onto the tongue of the shoe we go. This is another good indicator of whether your shoes are real or fake. Again, study the pupils of the heart’s eyes.

On this fake pair of CDG Converse below, the pupils are looking to the side slightly. You’ll also notice the black bars above and below the label are quite thin – they’re chunkier on real CDG Converse.

So let’s compare those pupils to those on the real shoe, shown below. This time, the eyes are looking straight ahead. Plus, they’re touching the sides of the heart rather than floating in white space.

You might also notice some subtle differences in the shape of the heart itself. On a real pair of CDG Converse, the top of the heart actually drops downwards more when compared to the fake CDG heart symbol. It’s a very subtle difference, but easier to spot if you compare the two pictures above.

With this being an expensive pair of shoes, it’s important than the stitching matches the price tag. If your shoe has loose stitching that doesn’t scream quality, there’s a chance you’re staring at a pair of fake CDG Converse.

For reference, I have a close-up shot below of the stitching on a real pair of CDG Converse.

Make your way to the front of the shoe and have a closer look at the pattern on the toebox. I’ve included a picture below so you can see what the real shoe looks like.

On the side of the shoe, there’s a Converse logo. This isn’t designed to be removed and instead is stuck to the CDG Converse permanently. By comparing the logo between the pictures below, you’ll no doubt pick up on some differences.

On the fake CDG Converse, the text itself doesn’t have as much weight. The letters are thinner and the ‘Chuck Taylor’ spellout is slightly lower quality.

On the retail pair, you’ll see that the text is far bolder. The ‘Chuck Taylor’ text is nice and clear.

The back of the shoe

On my fake pair of CDG Converse, there’s a very obvious mistake that gives the game away. You’ll see from the picture below that my pair actually says ‘Chick Taylor’ when it should be ‘Chuck Taylor.’

Take a look at your own pair of shoes and make sure the ‘Chuck Taylor’ spellout looks exactly how it should. If not, there’s a good chance you’re holding a pair of fake CDG Converse.

Dodgy spellout aside, I can’t see too many differences between these two pictures. If you spot anything, let me know.

Where to buy CDG Converse

If you’re buying CDG Converse, we suggest you stick to trusted retailers (or sellers) only.

Popular, trusted retailers that stock CDG Converse include the following:

If you know of any other trusted sneaker sellers, let us know via our Contact page and we’ll add additional links to this guide.

Everybody wants to grab a pair of CDG Converse for cheap. The problem is, the less money you’re willing to spend, the more likely you are to end up purchasing a pair that aren’t real.

If you want to buy CDG Converse but don’t want to spend loads of money, you may want to consider buying a used pair through sites such as eBay. Be very careful when you’re looking through the listings, though, and don’t be afraid to ask the seller for more pictures or proof of purchase if you’re unsure.

Available from: Thread Online, eBay (check the seller’s pictures and reviews before buying)

See the unmistakable CDG heart sat on a deep blue background. If you’re looking for something a little different compared to the usual black and white designs, this is a nice alternative.

Available from: : Thread Online, eBay (check the seller’s pictures and reviews before buying)

The original (and easily the most iconic) CDG Converse design, worn by countless celebrities over the years. You’ll definitely turn some heads in these.

Available from: Thread Online, eBay (check the seller’s pictures and reviews before buying)

If you want to rock CDG Converse in hotter weather, you might prefer this low-profile design instead of the high-profile shoe.