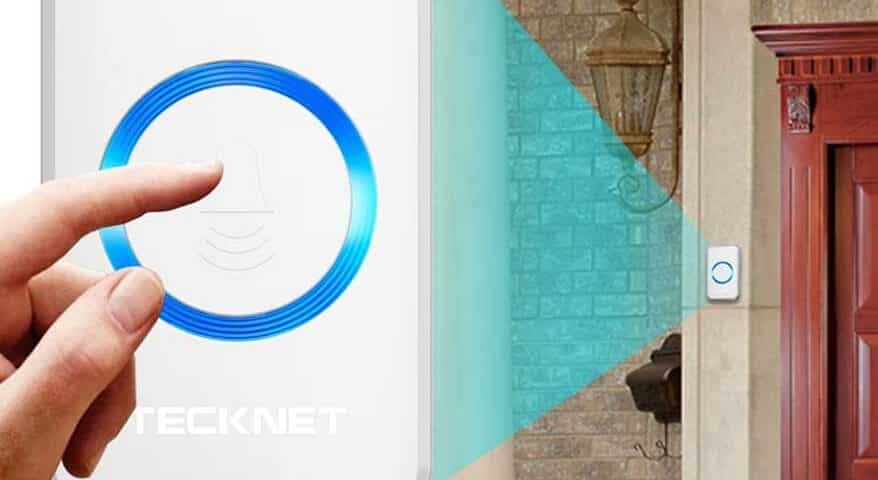 The TeckNet Wireless Doorbell is designed for two types of people: folk that aren’t too confident with DIY, or homeowners that don’t want to go through the hassle of setting up a doorbell with cables involved.

So how does this budget-priced doorbell compare to its key rivals, and is it straightforward to set up and use? Our TeckNet Wireless Doorbell review has the details.

TeckNet Wireless Doorbell: What is it?

Well, the clue’s in the name. This is an affordable wireless doorless that’s comprised of two parts. At the time of writing, the TeckNet Wireless Doorbell is easily one of the most popular doorbells on Amazon UK. With so many positive reviews, we wanted to see what all the fuss was about.

According to its makers, the TeckNet Wireless Doorbell has an operating range of over 300m, which isn’t bad at all. We were setting up the doorbell in a small two-bed home, so 300m was definitely beyond our needs.

Open up the TeckNet box when it arrives at your door and you’ll get a couple of goodies. First of all, you have the button that your guests will press when they arrive at your house. It’s IP44-rated for weatherproofing, which means it’ll survive a rainy evening outside. Next up you have the doorbell itself – our unit was configured to fit a UK plug socket.

Also in the box is a free sticky pad, which gives you a way of attaching the TeckNet Doorbell button to the outside of your home without using a drill. But if you do want to use a drill, the doorbell also comes with screws and wall plugs. We appreciated the fact that we were able to pick between these two options without having to order additional strips and screws on our own.

TeckNet Wireless Doorbell: how does it work?

The TeckNet Wireless Doorbell kit consists of two pieces: a button that your guests press and a plug-in receiver that goes inside your home. The two components communicate wirelessly so that every time a person presses the button outside, the receiver inside lights up and makes a noise. According to TeckNet, the button that guests push is powered by a battery that lasts ‘up to 6 months’ before it needs replacing.

When a guest presses the doorbell, you’ll obviously hear a loud noise coming from the receiver, but you’ll see it too. That’s because the receiver has some blue, built-in LEDs which light up every time the button is pressed. This is handy if you’ve hoovering and don’t hear the doorbell ring – you’ll see the lights illuminate and instantly know somebody is at the door.

TeckNet Wireless Doorbell: is it easy to set up?

It’s very easy, actually. First of all, you’ll want to take the receiver out of the box and plug it somewhere in your home, ideally near to your front door.

Before you find a position for the button, make sure it works. All you need to do is pull out the little battery tab and then press the big round button on the front. Assuming your receiver is plugged in and turned on, it’ll light up every time you press the button. Simple!

The TeckNet Wireless Doorbell scores major points for ease of use. We really like the fact that, even if you’re not super tech-savvy, you should still find the setup process straightfoward. But even if you don’t, TeckNet offers free lifetime technical support and 18-month manufacturer’s warranty.

TeckNet Wireless Doorbell: What else can it do?

Pick up the TeckNet receiver in your hand and you’ll spot three physical buttons on the side.

The button at the top is for cycling between different modes. You can pick between LED + ring, LED only or ring only. We were glad to see we weren’t stuck with a single mode.

With the middle button, you get to control the tone of your new doorbell. There are a whopping 32 different musical notes and tones to choose from – a couple of them gave us a little chuckle, but realistically most people will stick with the default ‘ding dong’. Also, it’s worth noting that each unique melody has a different LED pattern assigned to it.

Finally, we come to the bottom button. This one’s an important one as it lets you control the volume of the ring that comes out of your plug-in receiver. There are four levels of adjustable volume, running from 25db to 85db. We found that the default option was loud enough for our home, but if you’re buying for someone who is hard of hearing then turning it up a little won’t hurt.

Going off the price tag alone, we weren’t expecting too much from the TeckNet Wireless Doorbell. But actually, we were genuinely impressed by the quick setup process and the level of customisation you get with ring tones and LED patterns.

If you’re shopping for a cheap, no-nonsense wireless doorbell, the TeckNet Wireless Doorbell is definitely worth a closer look. We’re chuffed with ours.

The TeckNet Wireless Doorbell is available on Amazon in Black or White.

If you’re currently in the process of giving your home a much-needed makeover, check in with some of our other Home & Garden product guides: